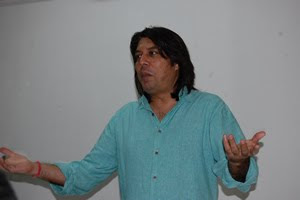 Piyush Jha, acclaimed Writer & Director of the film ‘Sikandar’ held a guest lecture on the topic of Filmmaking for the students of Digital Academy- The Film School, Mumbai.
Mr. Jha started his career with ‘Chalo America’, a small budget film, which had a lighthearted take on the fascination that millions of youngsters have for America. He followed it up with a satire on Bollywood called ‘King of Bollywood’, which was about an aging evergreen hero who refused to face reality and call it a day in showbiz. His latest film ‘Sikandar’ is an intense story about a young boy set against the backdrop of terror in Kashmir.
At the lecture he began by asking the students why they were in a Film School and said, “Anyone here because you want to be a Filmmaker? Do you have anything to say to the world? ...To be a Filmmaker you need to have something to say…otherwise what makes you different?” He stated that in the attempt to be a Filmmaker one has to be able to focus on a thought or a concept which is intrinsically one’s own, since what shines through in a film eventually is the ‘vision’. Talking about his previous films, he said, “I keep challenging myself & looking for something new to say…I’m not going to talk to you about the technicalities of Filmmaking now…that can be found anywhere…I’m here to challenge your sensibilities into thinking about why you want to make a film…” 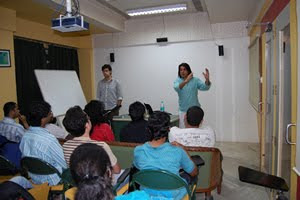 To arrive at a general consensus he discussed with the students about what kind of films they liked, it yielded categories like ‘cult films’, ‘historical films’, ‘thrillers’, ‘socially relevant films’ etc. The discussion also brought out a general bias that exists against films that are considered socially relevant. Reflecting on the situation, he questioned the need for a social message in films and said, “I don’t think it’s about a social message for the sake of it and social themes don’t necessarily have to be dull either, we should see if it’s capable of questioning us & moving us out of our lethargy of thought or even action…”
He spoke about how the movie watching experience becoming expensive, has resulted in the audience choosing a more lighthearted kind of cinema that fully justifies the expense. In turn capsizing the existence of other kinds of cinema and leading to filmmakers creating films that only satisfy the market. He felt that to let the moneymaking aspect dominate is the wrong way of going about it. He believes that the most important thing to be a filmmaker is to really love cinema - all kinds of cinema. However, he advised the students to take in all the aspects of filmmaking and rise above the problems.
On being asked what an amateur artist should take to a producer for him to consider investing a big chunk of money in that project, he said, “We have to make films that are able to make money…but we must understand our culture & history and make films that we believe in, that come from an internal instinct or thoughts that mesh with yourself…and in that come as close to commercial success as possible…” Though he firmly believes that today our cinema needs to strive, to move beyond what he terms: ‘the fascism of the cliché’ and develop a kind of cinema that originates from indigenous soil but with new thoughts, inspirations & contemporary ideas especially since the audiences have changed & are far more adventurous in their tastes.
According to him, another important subject was the ubiquitous nature of the star system in the industry, which hinders the genuineness of films sometimes. Addressing that, he said, “In India one thing you will face is the star system…you will be bombarded by it and everything will be about it…but you shouldn’t reject it…try to work it into your work…as it will benefit you eventually…” He concluded the lecture by saying, “There is no formula for success…one thing is for certain, if you want to make a film then do it any way you can…just be resolute about what you want…” He suggested to all the students that they should watch a lot of films but warned them against the perils of being ‘DVD directors’, eventually stating that the best teacher for a Filmmaker is reality itself.
Digital Academy offers courses in Screenplay Writing, Film & Television Direction, Cinematography, Film & Television Editing, Sound Recording & Engineering, Production Design, Producers Course, Film Making, Acting and Animation & FX.
For more information contact:
E-mail: response@digitalacademy.info
Visit: www.dafilmschool.com
Tel. no.: +91-22-28257009/+91-22-28257008
Posted by Marketing Team at 2:26 AM