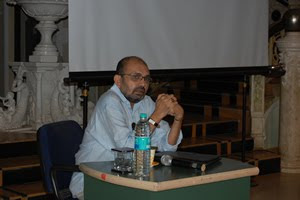 Vinay Shukla is a renowned Indian Film Writer and Director. He made the Hindi film Godmother, which won the National Film Award for Best Feature Film in Hindi in 1999 along with five more National Awards and one Filmfare Award. He has written films like ‘Viraasat’, ‘Hum Paanch’, ‘Ram Jaane’, ‘Raat, Shikaari’, ‘Thanedaar’, ‘Parinay’ and more. Along with ‘Godmother’ he has directed ‘Koi Mere Dil Se Poochhe’, ‘Mirch’ (currently in post-production), ‘Sameera’ and acted in the film ‘Maqbool’. He has been instrumental in designing the script-writing course at the FTII (Film & Television Institute of India) .

Mr. Shukla commenced the lecture with a brief overview of the History of Cinema in our country- to enliven the magic that came with its onset and to explain through it the unique traits of Indian cinema. He described the Christmas day in the year 1910, when a gentleman from the city of Nashik, Mr. D G Phalke saw the film ‘Life of Christ’ at the America-India Theatre and went home to tell his wife of his ambitions to make similar films but with Indian mythology at its centre, kick starting the era of the ‘Indian’ Motion Pictures.
By incorporating Indian mythology Mr. D G Phalke created an indigenous expression of the medium, which the people could relate to & hence accept.

With the advent of technology, came the first Indian talkies- the period drama ‘Alam Ara’, which had been adapted from a Parsi play. It popularized the song & dance routine, which eventually became a unique trait of Indian Cinema. The burgeoning of studios like Bombay Talkies, Prabhat Studios etc. around the 30s & 40s, brought with it the studio system, bringing many European technicians to Indian shores, who would work with regional filmmakers in Hindi films, resulting in the need for translators; eventually paving the way for specialized dialogue writers in the industry.

Summarizing the uniqueness of Indian Cinema, he said, “Our cinema aspires to tell epics…which is basically the conflict of high moral values…broadly a conflict between good & evil…”
According to him an epic tale cannot be told without elements like: a) Melodrama, which like poetry captures a large depth of emotion & if done well, doesn’t become unreasonable, b) Rhetoric, which is when feelings & words are woven into each other within the constraint of logic at a high emotional scale, c) Song & Dance, which allows one to express what can’t be expressed solely through dialogue & also advances narrative by compressing or elongating the concept of time in the film, d) Action, which brings a sense of immediate justice and e) Comedy, where the role of the comedian is often to play the fool yet be the wisest. Dispelling any skepticism about rhetoric or melodrama he said, “I wonder if a tale about conflicting values can even be made without melodrama… what is required for it to work is the truth of the ground work…most of the filmmakers today source their stories from other films they have seen, not from their own lives…which makes their films lack depth & emotion…” 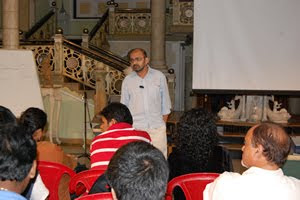 He felt that a formula film uses the features of drama repetitively & as stand-alone concepts that are not integral to the film whereas a film like Lagaan uses it judiciously and not with the intention of ‘luring’ the audiences, which in turn makes it beautiful. He then elaborated on a conversation with his young daughter wherein he was trying to cull out the aesthetics that the new generation desires in Films; it yielded a few keywords such as short, subtle, not over-dramatic, grey, contemporary etc. that Mr. Shukla believed were universal and needed urgent attention by the new generation of filmmakers. He cited films like Dil Chahta Hai, Jab We Met, Rang De Basanti etc., which lie within the framework of urban values & contemporary sensibilities. Speaking about today’s audiences he said, “Today’s audience likes genre specific films…take any kind of story and there is already an example…” When asked about Producers and choosing topics for Producers he replied, “Do not be derivative in your work…you need to be smart enough to choose something a Producer would like, but something that is integrally yours…”

He also felt that it is necessary to estimate the basic theme that one is dealing with in a story; knowing what one is working on in a story helps to create necessary plot points and orchestrate the right resonances from the topic. Addressing the importance of the appeal of the topic he said, “Only do the things that excite you or move you! Creative people should never make something they are not interested in…you will be lucky if you come out of it…no work of creative satisfaction can happen if the creator is not excited…but one should never be disheartened when one comes across the blocks…perseverance is key, you should never give up…”

On being asked about whether he writes, thinking about specific actors for the roles, he said, “I don’t write keeping an actor in mind, some might do it…I don’t know if it is advisable. Mahatma Gandhi said that when a person truly gives, he gives a part of himself…in the same way when a writer writes, he gives a part of himself/herself…the character mirrors the writer.” He felt that the focus should be on what satisfies one’s sensibilities rather than pandering to alien forms & values as the answers can come only from within oneself; books, friends, films can only facilitate the questions. Conversing about his National Award winning film ‘Godmother’, he said, “The values you follow will come back to you as a mirror image…whatever path you follow the question comes back to you about whether you are right or wrong…I believe that films do impart values, if only subtly to society…so at some level it is important to be a good human being to be a filmmaker…there is that responsibility…”

His concluding advice about what it takes to be a good director was that one needs to raise one’s level of understanding, awareness & constantly evolve until one reaches a higher level of consciousness without which no creative artist can create a real work of Art.