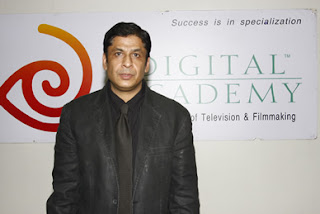 Sanjay F Gupta, the renowned Cinematographer of films like ‘Singh is King’, ‘Mujhse Shaadi Karoge’, ‘Qayamat’, held a workshop for the students of Digital Academy – The Film School, Mumbai (Bombay) India.
Sanjay F Gupta is also the managing director of Grey Partridge (P) LTD with over 20 years of experience in commercials, features and music videos. He has a degree in Cinema from Columbia College, Los Angeles.
Mr. Gupta started a discussion about the roles of a DOP (Director of Photography); Talking about an industry, where very few Directors can discern the role of a DOP, he spoke of how frustrating it can be to work with a crew that didn’t understand photography. Expounding that, he said, “Now when you are looking into the viewfinder & your fingers reach for the record button…being a little idealistic, I think its starting to make History…its going to be on a negative, then it will become digital and finally permanent…hopefully we are creating Art of some sort…lets hope so…”.
He clarified that although the conditions today are not favorable to Cinematography as an Art form, it is extremely important that the students clearly understand & appreciate the role it plays in a film. He emphasized that one needs to know all that a Director of Photography should do to make the film look its best, for example, how many windows are present in a set, angle of light, position of the sun etc. He encouraged the students to break down cinematography into its many elements: Framing, Lensing, Lighting, Camera Movement, Exposure, Focus, Film Stock, Filters and discussed them in detail.
Talking about Framing he said, “The Frame has to be dedicated to what it is trying to communicate...it’s not just about beauty…” Then he recounted an incident on a shoot with renowned International Director Shekhar Kapur who made ‘Elizabeth’ & ‘Bandit Queen’, wherein he had framed the shot of a horse running in the sunset according to the one third rule, keeping the horse on the edge of the frame; but on Kapur’s odd request he decided to keep the horse at the other edge revealing behind it a trail of beautifully backlit dust, which transformed the shot, making it look magnificent. And so he advised that it is not necessary to follow the one-third rule of framing dogmatically, but rather let it guide you into discovering things. 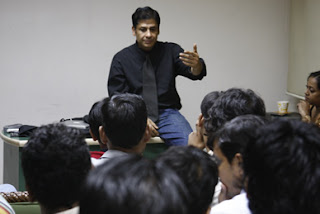 Another important responsibility of the DOP according to him was to know about how the light will follow through in the course of the day and understanding the area along with the light sources & shadows etc. with a digital camera if possible. But knowing the way Producers work, he said that most of the time it is not easy to do recces of this kind due to constraints. However he said, “You have to outsmart your producer. If you love your Art then you will do that, maybe send an assistant to check the area out beforehand…”
Certain fundamental things that he believes need to be sorted out at such recces are:
For outdoor locations check the position of the sun, shoot the wide & master shots first, do close-ups last (because they are easiest to do in bad light conditions) and match the shots through out (the biggest challenge)
For indoor locations check the number of practical lamps and the number of halogen lights, check if chandeliers, bulbs, lampshades & all other lights are on dimmers, whether identical lights are on the same dimmer and if tube lights are flicker-free (i.e. Kinos). If some bulbs are burning out in the frame then use an orange or yellow gel with the correct degree (1CTO, ½ CTO etc.)
He added that knowledge of things like ‘which filter is used when’, comes with experience & ‘home-work’, “Do your homework, because no one else will…the more homework you do the better your work will look. Also the use of story boarding is very essential as it helps to communicate to the crew-members and sometimes even understand the shot yourself…”
Stressing on the fact that the ultimate idea is the mood of the image- He broached the topic of Depth of Field, which is affected by three factors: a) The kind of lens used, b) The f-stop (aperture) & c) The distance between the camera & subject. A shallow depth of field generally produces an interesting effect, directing attention sharply it can add a certain drama to the image. Video has a larger depth of field, which makes its image quality very crisp & clean eluding the traditional feel of film. In spite of this he added, “Better learn to work with video…it is the future…”
One of the other things that can change the mood of a shot without changing much else is the exposure. With exposure one can over-expose, under-expose or expose selectively with surprising effects. According to him correct exposure is subjective and can be achieved in many different ways, “You have to be very selective & very careful with what you expose for…don’t be dogmatic, look around for the options to create the right mood…”
Divulging one of his many tricks of the trade he said that choosing a particular f-stop and lighting around it can make things a lot easier. In lighting for proper chroma key, he suggested that the green screen be evenly lit, with a slight over-exposure of half a stop & the subject kept at least 10 to 15 feet away from the green screen, so as to not allow any green to bounce onto the subject.
On the subject of lighting he spoke about the two fundamental types of lighting: hard light & soft light. He described their attributes as hard light having a) more intensity, b) sharp shadows, c) better details and soft light having a) less intensity, b) very soft shadows, c) more spread (creating an overall pleasant look). He gave examples of how the monthly Indian magazine ‘Femina’ shot its pictures with everything in soft light, which could get boring, whereas a magazine like ‘Vogue’ used hard light very innovatively & beautifully. However, he summarized by simply stating that when one is in doubt, one should resort to soft light. Soft light needs a large light source, which can be done using bounces or using diffusion material in front of the light.
He felt that as a DOP another one of his tasks is to be an effective communicator with the Director, the crew & the cast.
In his message to the Direction students he said, “As a Director, you need to know a little more than everybody else, you need to know little bit of everything…how are you going to do that? By reading a lot & going to as many shoots as you can…” He also suggested that visualizing the entire look of the film beforehand was a good idea because it helps greatly to supplement the script & communicate one’s vision.
Speaking about Digital Academy- The Film School and their students, he said, “It was a delight…these guys are really enthusiastic & really want to learn…it’s a great school. It seems very intimate. Seems like everybody is personally supervising everything…like its being taken care of from the heart, which is very obvious…”
Digital Academy offers courses in Screenplay Writing, Film & Television Direction, Cinematography, Film & Television Editing, Sound Recording & Engineering, Production Design, Producers Course, Film Making, Acting and Animation & FX.
For more information contact:
E-mail: response@dafilmschool.com
Visit: - www.dafilmschool.com
Tel. no.: +91-22-28257009/+91-22-28257008