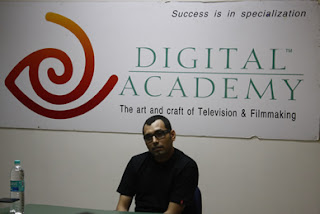 Neeraj Pandey, acclaimed Film Director & Screenwriter of the award-winning Indian thriller drama film: ‘A Wednesday’, spoke to a packed room full of students at Digital Academy- The Film School, Mumbai. Born and brought up in Kolkata, he moved to New Delhi, where he graduated in English Literature. He was employed in Legacy Entertainment, a company started by the Dalmia group to make television programs where he learnt his basics.
Not being schooled in Film, he is a self taught Filmmaker. He struggled to get an unconventional film like ‘A Wednesday’ made and has persevered towards a prodigious set-up which will allow him to direct the films he envisions, with minimal interferences, by attempting to co-produce them himself.
Talking about ‘A Wednesday’ he said, “I took it to all the big (production) companies…None of them were interested in a first time director like me, who was demanding a cast like this (Naseeruddin Shah, Anupam Kher etc), for a serious film with no songs and no heroine!” When asked about whether choosing to have songs or not was a tough decision, considering their entertainment and marketing potential, he said, “See the story should be worth telling…don’t waste your audience’s time, it should be cathartic…entertainment has many different definitions…if my film can make you talk about it for two hours…that means it has connected with you…that is also entertainment…”
When it comes to writing, he prefers to think of ‘writer’s block’ as just a mental condition, summing it up by saying that either one feels like writing or one doesn’t. About his process for ‘A Wednesday’, he revealed that the trick was to get the ‘end’ first and work backwards towards the beginning. He prefers to first think thoroughly through the story, become clear about the beginning, middle & end, and then write it. The gestation period for ‘A Wednesday’ was around two months and the writing period merely seven days. Characters and casting, he felt, took shape as one writes the film. He explained that all the gadgetry and technical details of the film were accurate and carefully researched with the help of Mr. Rakesh Maria (Mumbai Joint Commissioner of Police) and the character of the hacker emerged from discussions about real life cases with Mr. Maria.

Having directed many one hour specials for Television, earlier, he reminisced how he would treat even those productions as he would a film, simply because he wanted to be making films later. He lamented the meager creativity on Television and joked about the rising level of ‘creativity’ on news channels these days, but concluded that Television needed to go back to those one hour specials and that intelligent programming was the need of the hour.

Returning to the topic of cinema, he spoke candidly about how Hindi literature has greatly helped him in his writing especially with dialogue and that Bimal Roy movies have helped him tremendously whenever he has been stuck. According to him, to be a good Director, one has to read a lot, watch a lot of movies; as an individual push oneself tenaciously and be very clear about what one wants. Cinema being a collection of arts, he thinks that a good script along with all the other processes of Filmmaking and great teamwork, make for a fantastic film.