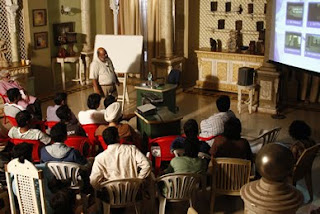 Shukla began serious theatre in 1986 with roles in plays like A View from the Bridge (Arthur Miller), Look Back in Anger (John Osborne), Ghashiram Kotwal (Vijay Tendulkar) and Hayvadan. In 1991, he joined the NSD Repertoire Company - the professional wing of the National School of Drama - as actor. The next year, he got his first break when Shekhar Kapur, impressed with his work, created a role for him in Bandit Queen.

Aiming right at the heart of the issue, he asked, “Why do you want to make a film?” Concluding that it is a strong desire to communicate a perception, a story or reflection of society, he asked, “Why film? Why not music, theatre or the other arts? Why as me, do I make a film??...It is not a passion or profession for me, it is a compulsion for me…if I don’t make films, I get sick, I’m not happy!” displaying his vigor & intensity, he quoted filmmakers like Robert Rodriguez (El Mariachi) who did not wait for their films but ploughed ahead to create their films against all the odds.

The first step in the path towards creation is the ‘right’ idea, judging an idea as good or bad is secondary. Ideas are born in the landscape of Art; Art brings freedom- to say what we want to say, to share an idea or concept; people will identify or relate with it only if the creators themselves identify with the idea. From the idea one has to brew the script.
Writing is a tedious process, it involves extensive thinking, writing, reading, even enacting and continuously rewriting. But how one approaches the film is what sets the conditions for the conception of a film; it must be a natural and candid approach. The beginning is precious, the first shot decides the pace, feel and look of the film, “Every scene especially the beginning has to transport people into that scene, so don’t try to hurry the beginning…the detailing is very important…” saying this, he proceeded to show the beginnings of some movies like Lawrence of Arabia-David Lean, Fame-Allan Parker and Amadeus-Milos Forman. With these, Mr. Shukla illustrated how innovation helped in increasing the intensity and by revealing the action slowly, a thrill and suspense was created which succeeded in transporting the viewers into the films. 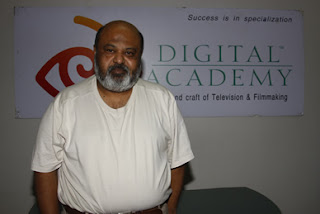 Talking about his first director, Shekhar Kapur’s film ‘Elizabeth’, he said, “When you write a script, you use words & language to communicate, in direction one has to rewrite it; the elements are different, the actors, the movement, the frame etc come in to play…one has to think in a different way. Like it or not, filmmaking is about writing…”

One among the many queries that arose from the students was how does one write dialogue, as it must seem real and true to the characters and their situations; how much is research and how much is imagination? To which, speaking about ‘Satya’, he answered “We did not go to chawls or spend time with the gangsters, I was at the time still more of a Delhi person; then how did we manage the realistic kind of dialogue? ...Humans are the same whether Delhi or Mumbai…the psyche is the same, behavior is based on how you see the world and how you project it to make it seem believable to the world…I have a certain background and I use its quality and tone to write my dialogues…”
It is important to take the thought from an original space and then convert its physicality of expression. In Satya, a lot of language inputs came from the actors themselves; the lingo was adopted but the spontaneity of dialogue came from improvisation, which is not ‘adjustments’ rather it is finding the layers in a script. And to develop such a script, the artist must never be satisfied; the process should be an unending quest for perfection. On being asked, what is the ideal location for writing, he said, “I cannot write when I am alone; I have to be in chaos…my process is not secret. I like reading out my scripts to anyone-the chauffeur, a neighbor…as it helps me see my script and understand it better…who I’m reading it to becomes immaterial…”

Another stage of writing is ‘editing’. It is a system by which meaning or narrative is created through the joining of shots. Likening the editing process to the process of cooking, he dispelled certain myths about editing, “If it’s not working in the rushes, then even if editing can hide the mistakes, the film will definitely lack something…”
The sequence from the film Fame by Allan Parker, in which an art school cafeteria filled with the cacophony of noise and chaos, gets effortlessly converted into a roomful of pulsating music and energy, displayed how editing alone cannot be responsible for such a conversion. It creates rhythm and pace which works along with the visual quality and other elements to create the spirit of the scene or film.
With the realm of editing one realizes that direct story-telling isn’t enough. Without the unfolding of events in a dramatic fashion, there will not be a body for the film. After hearing out the suggestions about what drama really is, he said “Even I do not know what is drama…but I know the elements…a situation where the character is smaller than the situation…is dramatic…”
Again he picked out choice scenes from three movies, Alfred Hitchcock’s Psycho-where many elements of drama are present (love, robbery, need for money etc), Abbas Kiarostami’s ‘The wind will carry us’-an ordinary situation’s potential for drama, like running around to get a signal during an important phone call, becomes obvious and in ‘No country for old men’ by the Coen Brothers, the dramatic tension was created because of the audiences knowledge that the character is a killer, bringing to us the two elements of suspense and surprise.
However, everything can be dramatic, it is the way one tells it that creates the drama, “There is nothing called fast pace or slow pace…every film requires an optimum pace”
This optimum pace and the information given to the viewers are the primary tools for creating a dramatic impact. The anticipation generated prior to the moment also depends largely on the ‘detailing’, “I personally don’t like black and white characters…everybody is a shade of grey…a darker grey or lighter grey is achieved through detailing…” said the selective Saurabh Shukla.

With the beginning of the robbery sequence in Dog’s Day Afternoon directed by Sidney Lumet and written by Frank Pierson, Saurabh Shukla concluded the workshop on a lighter note, portraying through the clip how minute details of the characters are so integral in pushing the story forward and also why the humor generated was so effortless and yet funny.

Citing his own example, he tossed some pointers to the distraught students who were still boiling with questions.
· Make writing a habit.
· Be confident, desperation kills a lot of things.
· Keep reinventing yourself, don’t be scared, be fearless.
· Writer’s block is like the common cold, there is no cure…

With a sincere tone he thanked everyone and said goodbye.