ANURAG KASHYAP, ONE OF THE MOST VERSATILE AND PROLIFIC FILMMAKERS,SPEAKS TO MUMBAI UNIVERSITY STUDENTS, ABOUT CAREERS IN CINEMA. 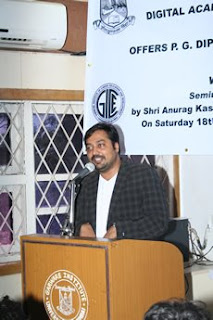 Mumbai University, on its 153rd Anniversary announced its association with the Digital Academy, initiating the Post-Graduate course in Film & Television and invited Mr. Anurag Kashyap to speak about careers in Film & Television.
Anurag Kashyap is a critically acclaimed Indian film director and screenwriter. He is considered one of the most versatile and prolific filmmakers in contemporary Hindi cinema.
In 1999, Kashyap won the Best Screenplay award for ‘Satya’- a cult film based on people who are part of the Mumbai underworld and the Special Jury Award for his short film ‘Last Train to Mahakali’ at the Star Screen Awards. His feature film debut Black Friday won the Grand Jury Prize at the 3rd Annual Indian Film Festival of Los Angeles (2005) and was a nominee for the Golden Leopard (Best Film) at the 57th Locarno International Film Festival (2004).
One of his concerns was to explain the need to ‘learn’ filmmaking. A course helps because it teaches you the very basics, the fundamentals of filmmaking, “You need to know them to reject them and create your own rules & methods…” he said. He reflected on how many times he has come across people who keep talking about how they want to ‘shoot’ their film, when it’s not about the ‘how’ but rather the ‘what & why’. Directors like Danny Boyle are capable of simultaneously editing, shooting and generating narrative, but achieving that state is a slow process, which is to achieve that degree of instinct. Earlier it took people years of struggle to pierce through to the medium, both in the corporeal sense of access and cerebral sense of understanding, finally becoming filmmakers at 50 or 60 years of age, whereas today there are people as young as 21 who are making films, precisely because of abundant film education. 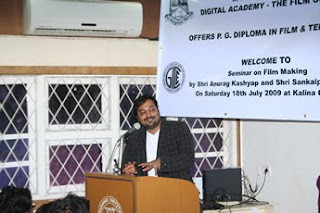 When it comes down to the actual act of filmmaking, the film emerges through the passion and vision of the creator himself and how he applies himself to the process of imagination. “I still don’t know what camera aperture is, but I have an eye for location and detail…if I know what I want to create, then I can go looking for it…” When in the process of realizing his concept or idea, he is open to ideas and change. He believes that if one can discern the essence of their films, then they won’t go wrong when they are allowed to let go of themselves. Like when he had to shoot on an empty street with neon signage which was crowded throughout the day and so shot at 4am, with a particular blue shade of the sky, resulting in a psychedelic imagery, which he discovered that day by accident, he realized the potential of ‘chance’ in filmmaking and also the importance of continuing in spite of all odds, “Go outside and make a film, then go see why it didn’t work…why the audience didn’t connect with it…find out the external and the internal reasons of its failure…such an integral angst one has to go through…What must motivate the maker is not the ‘Oscar’ but the journey…” he said, outlining the importance of the journey of filmmaking which is endless.

On being asked about whether the current spate of independent production houses catering to a more self-determining group of filmmakers, is a trend that is here to stay or not, he replied that such a condition is almost a necessity, as his own survival depends on the survival of the likes of him, which is why it is his responsibility to preserve this condition or trend. Citing the presence of his blogs as a place where students and film lovers can unite and discuss many issues pertaining to film, he warmly welcomed everyone to join this new era of films, to make use of all the resources available and finally to make the film itself more important than their own selves.