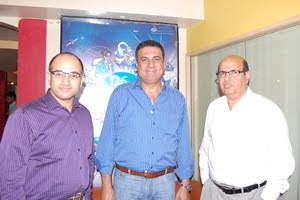 Renowned Film & Theatre Actor Mr. Boman Irani conducted a guest lecture on Acting at Digital Academy-The Film School.
Boman Irani started his career in the entertainment industry as a photographer, but soon expanded to theatre with a cameo in Alyque Padamsee's play ‘Roshni’ and a double role opposite Pearl Padamsee in Raell Padamsee's play ‘Family Ties’. In 1996 Rahul Da Cunha was looking for an actor for his adaptation of ‘I'm not Rappoport’ and the 34-year-old Boman Irani was cast as a 75-year-old man for the play ‘I’m not Bajirao’. He then portrayed Mahatma Gandhi in the Feroz Abbas Khan play ‘Mahatma vs. Gandhi’. This play explored Gandhi's troubled relationship with his eldest son Harilal Gandhi.
He went on to do TV commercials for numerous products, such as Fanta, CEAT tyres, Smyle cough syrup, Parle Krackjack biscuits and more.
He made his Bollywood film debut in the 2000 film Josh. Since then, he has appeared in many Bollywood films playing a variety of character and supporting roles, ranging from comic roles in films such as ‘Main Hoon Na’, ‘Waqt: The Race Against Time’ and ‘Khosla Ka Ghosla’; to serious dramatic roles in ‘Lakshya’, ‘Veer-Zaara’, ‘Don - The Chase Begins Again’ and the English language film ‘Being Cyrus’. His first notable success came with his role as the eccentric Dr. J.C. Ashtana in the 2003 hit comedy film ‘Munnabhai M.B.B.S.’. He also appeared in the 2006 sequel ‘Lage Raho Munna Bhai’ as a different character, ‘Lucky Singh’. Another recent noteworthy performance was in the 2006 film ‘Khosla Ka Ghosla’, where he played a comic negative character, Kishen Khurana.
At the lecture, Mr. Irani began by throwing a host of questions at the students. He said, “What makes a good performance? How can we judge a good performance? Why do we need to analyze a good performance? We are no longer laymen, it is our duty as students of cinema to find out why a performance worked…or if it was appreciated for the wrong reasons or if it was sensationalized…” The responses from the students suggested that acting was perhaps about holding the audiences attention, being realistic, connecting to an audience, living the character on screen, believability etc. But Mr. Irani challenged them by asking if holding one’s attention, even through gimmicks & tricks could be construed as good acting. Cinema being such a complex medium, he felt that good acting cannot be defined rigidly, “To me Acting is lying…we are playing someone we are not...it is the most legalized form of lying in the world and it is about how well you lie, but in the process the only way you can do it and do it well is to do it with truth!” Reminiscing about one of his earliest plays, ‘I’m not Bajirao’, he described the sense of power he had felt & enjoyed, while playing the character of a 70-year-old man in the two-person play. He attributed that sense of power to the concept of the actor’s mask, a necessary tool to hide the truth about one’s real identity. 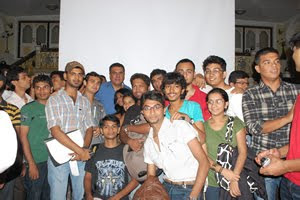