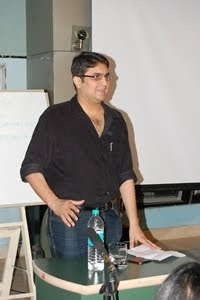 Manish Gupta, renowned Writer & Director conducted a guest lecture on filmmaking & cinema at Digital Academy- The Film School, Mumbai.
Manish Gupta has had a curious career graph he graduated in Mechanical Engineering and after giving six years of his life to the field, found his calling and decided to join an Ad agency as copywriter and began writing TV & radio commercials. After getting mesmerized by the film ‘Company’ by filmmaker Ram Gopal Varma, he gave up a lucrative career in advertising and began writing for Cinema.
He has written the screenplay for movies like D, Sarkar, James and Darna Zaroori Hai. His directorial debut was Darna Zaroori Hai, a montage of six different stories. He followed this up with ‘The Stoneman Murders’, which was inspired by a real life story about a serial killer who terrorized Mumbai.
He started the lecture with a tongue in cheek statement saying, “I don’t believe in lectures…there is no point in it! ...But I believe there is always a possibility of being a better filmmaker…so here I am!” Armed with the script of his film ‘Sarkar’, he approached the subject of ‘Screenplay Writing’. He asked the students if any of them had written a story, after which he illustrated some of the common errors that beginners made while writing their scripts: like treating the story similar to a screenplay or deciding how to shoot the scenes before completing the story outline etc. Citing the example of the film ‘Sholay’, he extracted the simple story that forms it’s skeletal structure and laid it bare for everyone to see, exemplifying its importance he said, “The skeleton of the film…that is the story outline may not be entertaining, but stronger the story is, stronger will be the screenplay & stronger will be the film… the element of surprise and all the ‘what happens next’ plot points, are what you wrap the skeleton with, to finally form your screenplay”
He acknowledged that when writing a screenplay it is common for the writer to experience a block and advocated that the solution is as simple as going for a walk or even taking a bath, as the idea is simply to disconnect from the process and then re-enter it freshly. He believes that to never encounter a block one must write only about what one is truly passionate about, “Make films, write films & see films only if you are passionate about them…not for the sake of money, success or fame…but for the sheer pleasure of waking up in the morning and thinking solely of your film and everything that surrounds it…” 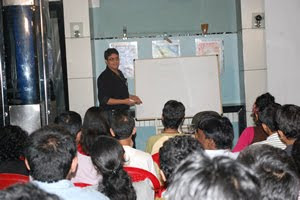 Recounting the experience of writing ‘Sarkar’, he spoke about the copious amount of research he did to form many of the characters in the film, which were inspired by ‘real life’ characters. On being asked about the difficulty of conceiving a truly original character he said, “It is very difficult to conceive a completely fictional character…your writing will always be derived by something from your experiences or from somewhere in your life… even Batman’s character was conceived by Bob Kane after being inspired by the character of Zorro!”
Elaborating on the process of story writing he said, “There is no hard & fast rule for story writing…you can start with a story, then as better situations come along the story evolves & moves into better territories…but for that you must have the story-structure in place…” He described the process of story writing as being organic & felt that it is not a rigid logic that governs it, thus making it a very difficult medium to master. He recommended the book ‘Story’ by Robert Mckee to all who were interested in honing their skills as story writers and even as filmmakers. He also felt that what one can learn from practical knowledge one can never learn simply through theory and suggested that the students go through the screenplay of his film and then watch the film to increase their understanding of the entire process. Moving into the real world constraints of story writing he described the conflicts that arise between a directors point of view and that of the writer.
On the subject of Screenplay writing he said, “Once you know what you want to express (story) then we come to the most crucial aspect of filmmaking, the screenplay…but writing an original screenplay is a very difficult task… to achieve even a satisfactory level one has to write at least five drafts of the same script….” He felt that the screenplay is where the film truly finds itself coming to life as it is an all-encompassing document that amalgamates sounds, visuals, emotions & actions, that prepare for the birth of the film on celluloid. He deems the process of taking each step from the story outline & converting them into scenes full of impact as the true method to create a screenplay.
‘Screencraft’ by Sid Field & ‘Making Movies’ by Sidney Lumet, were two books that he recommended, although he cautioned the students that these books can only function as guides, since writing for a screenplay cannot be taught.
He appealed to the students to pay attention to the important aspects of a screenplay such as dialogues, sequence descriptions, scenarios, visualization, gestures of the actors etc. He said that as writers one has to write in such a way that the transitions are smooth and each scene flows into the other, without resorting to clichés or formulas. He emphasized the importance of this by describing a scene from acclaimed Director Shekhar Kapur’s film ‘Paani’ where the character staring into a pool of water sees the reflection of an airplane flying above, and the scene immediately transitions into his past with the airplane as the common motif, thus avoiding a clichéd flashback dissolve by using an intelligent visual ploy. However, he felt that one must be careful to not get into exhaustive detailing as that can result in a boring screenplay that lacks the progression necessary for the medium of film. He compared ‘writing for the novel’ with ‘writing for cinema’ to exhume the true essence of writing for a time-based medium by saying, “A novel is read at leisure whereas a film is constrained in time…in a novel the writer has to transport the viewer into the location…but in a film the location is to be viewed, so the details of the location, gestures, clothes, props etc. are more representative than descriptive in the screenplay…”
Entering into the nuances of screenplay writing he spoke about the three act structure, i.e. Set-up, confrontation & resolution or start, middle & end along with the tricky role of sub-plots. He felt that comic relief must be interwoven into the screenplay and that using regional language genuinely can add flavor & authenticity.
Talking about writing as a profession he said, “As a writer your mind is like a loose cannon, your imagination wanders into all the places that thrill you…its one of the things that cant be taught…if you do not have the instinct to write then don’t attempt it…” He clarified that being a bad writer does not mean one cannot be a good filmmaker, since a good relationship between a writer & director always yields a superior film.
He bemoaned the attitude of producers who like to include song & dance routines in their films simply for the sake of publicity & profit, emphatically stating that he preferred films not within the song & dance category.
Concluding the session with a clip from his directorial venture ‘The Stoneman Murders’, he elaborated on his directorial experience, speaking about the instinctive components of direction & filmmaking. He finally advised the students about approaching their career in filmmaking with seriousness and said, “Work only with directors whose work you like… otherwise you’ll get frustrated. Work with different kinds of directors, expand your vision, but make sure you work under someone you respect…”
offers courses in Screenplay Writing, Film & Television Direction, Cinematography, Film & Television Editing, Sound Recording & Engineering, Production Design, Producers Course, Film Making, Acting and Animation & FX.
For more information contact:
E-mail: response@dafilmschool.com
Visit: http://www.dafilmschool.com/
Tel. no.: +91-22-28257009/+91-22-28257008
Posted by Marketing Team at 11:11 PM