RENOWNED MUSIC DIRECTOR, SAMEER TANDON CONDUCTED A GUEST LECTURE ON THE SUBJECT OF MUSIC IN CINEMA AT DIGITAL ACADEMY- THE FILM SCHOOL 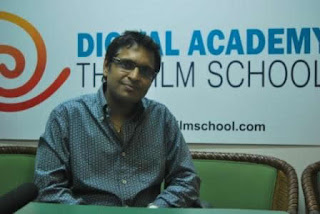 Renowned Music Director, Shamir Tandon conducted a guest lecture on the subject of Music in Cinema at Digital Academy- The Film School.

Shamir Tandon made his debut as a Music Director with Raveena Tandon's 'Stumped' in 2003 and has 13 films to his credit so far, including 'Rakht', 'Page 3', 'Corporate', 'Traffic Signal', 'Bal Ganesh', 'Superstar' and more recently 'Jail' among others. He is one among the very few music directors of today who has made legendary singers like Lata Mangeshkar, Asha Bhosle, Jagjit Singh and Manna Dey sing to his tunes. He composed the album ‘Asha and Friends’, which had some interesting duets by Asha Bhosle with actor Sanjay Dutt, actress Urmila Matondkar and Australian fast bowler Brett Lee. He has to his credit more than 150 advertising jingles; audio visuals for popular brands like Coke, Pepsi, Liril, Reliance, Taaza, Samsonite etc. and has done the world cup anthem for the last World Cup where he made 11 leading singers sing in one song.

He has done an MBA and was a Cost Accountant by profession. He worked with Singapore-based Virgin EMI, a very big multinational corporation, as CEO of Virgin Music India. He moved on from Virgin in 2006 as a country head to pursue his dreams of composing music. Today, he has been Managing Director and Music Director both with equal ease.

Mr. Tandon began by speaking about his unusual career graph, which began in merchant banking, Hire Purchase & Lease and then took a major shift to entertainment when VIRGIN EMI music set up shop in India. The usual mentality of the corporate world regards the creative professions as secondary, however, his passion for music succeeded in luring him towards the music industry. He soon realized that Bollywood films dominated the entertainment industry in India and that any music can thrive only if it is connected to the films. The Music Directors were generally undermined and led very low-key lives. Citing the successful careers of artists in the west, he inferred that the reason why Indian music composers who make hundreds of songs, don’t find any returns is the lack of a stoic copyright system. He said that the only way things can change is if the new generation of professionals and viewers/audiences creates an environment where creativity and copyright is respected.

Demystifying the creation of music in the industry he said, “Often it is assumed that the Music Director is solely responsible for the music of a film, the fact is that there are many people collaborating to make the music come through… the music arrangers and programmers often are the creators of the instrumental ‘climb’ before the song is sung… and bring together the different bits of music to create a song…” Although the composer through his inspiration creates the seed, which is the tune, the final output is a result of a great degree of collaboration and teamwork.

He extolled the brilliance of legendary singers like Lata Mangeshkar and Asha Bhosle who he has closely worked with, venerating their dedicated and disciplined attitude towards ‘riyaaz’ (practice), which fuels their beautiful voices. He lamented that today’s singers concentrate less on their voices and more on creating an image thus making their intrinsic product weak. He relies on the knowledge he accumulated from the corporate world to work in the field of music. Explaining this he said, “Creative impulse is important but you have to understand consumer preferences and market your music in tandem with their changing tastes…” He stated that any creative process finally boils down to man management, hard work and talent selling. He advised the students to develop an in-depth knowledge of anything they do so as to be able to accept any challenge that comes their way.

In the actual act of composing there is no way to say whether the tune incites lyrics or the other way around. He cited the example of the legendary R.D. Burman who being a Bengali and not knowing Hindi very well, would compose his tunes while mouthing nonsensical Hindi words. In relation to a film it is the Director who defines the musical boundaries for the Music Director, he decides the fabric of the music he wants to dress the film in. Describing the magic of creation he said, “There are no schools for Music Direction, even if there were any, they’d teach you some instruments, some ragas and tones etc. what one can learn are the tools and the elements employed to create a song, but the creation of something itself can never be taught…” He said that having no classical training in music does not restrict him in any way simply because the ragas and the technical aspects come naturally/ instinctively to him, which is the result of extensive exposure to music, constant experimentation and conscious study. 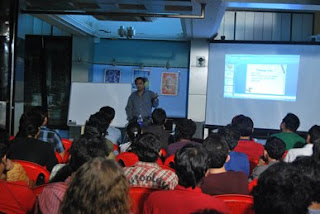 He suggested to the students that they should always remain open to new technology as that is the only way they can survive. He recounted the time when he had to make a recording with the great singer Asha Bhosle, while she was seven seas away in the US; so the song was recorded over the Internet and was one of the first of its kind for the Indian industry. He said that it was made possible only because Ms. Bhosle was willing enough to try something new.

He concluded the lecture by advising the students to look at opportunities outside of Mumbai also, so as to derive more knowledge and not just be steeped in Bollywood. He illustrated the need for traveling and encountering different cultures, by discussing the influences of Scandinavian music on some of his songs and the enrichment it brought. He reminded the students that passion should always be the driving factor.

Posted by Marketing Team at 8:35 PM